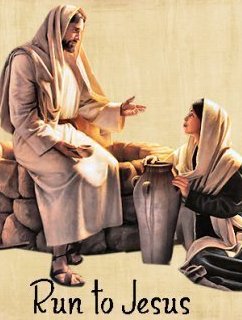 And said unto the woman, Now we believe, not because of thy saying: for we have heard him ourselves, and know that this is indeed the Christ, the Saviour of the world. John 4:42

Once upon a time, there was an ordinary woman having kind of an ordinary kind of day. This ordinary woman had made several bad decisions in her life that brought her to where she was that day. She had spent most of her adult life looking for happiness in what appeared to be all the wrong places for she had been married five times. Possibly she was thinking of her past mistakes as she walked slowly down the path as she did daily to draw water from the well. There was probably no hurry in her steps as she perhaps weighed the pros and cons of marrying the man she lived with now - taking her time daydreaming on this ordinary day.

At the end of her journey, she expected to find the well, draw the water, and return to her home and carry out her daily routine. However, at the well, the ordinary day turned to extraordinary as she met Jesus, the Messiah, who loved her, despite every mistake she had ever made. She wasn't even looking for Him but found Jesus in a totally unexpected place. Jesus went out of His way to make sure He was at the well in that unexpected place to meet her.

After Jesus gave her the living water (forgiveness, love, joy, mercy, grace, hope, eternal life) she abandoned what she had been doing before. She left the water pot and I believe actually ran to tell the men in her city how she had found Jesus and how they could also find Him.

Through this one ordinary woman, many Samaritans came to know Jesus. As they went and met Him for themselves they received the living water.

Jesus still has a habit of showing up in unexpected places on ordinary days to ordinary people. Through what we perceive to be "chance meetings" it is possible for entire cities, states, and nations to run and drink from His living water. How exciting!

Lord, we pray for each and every ordinary person going through a daily routine. May this be the day they meet you in an unexpected place and do extraordinary things to cause many people to run to you.